To support evaluations of film acting, the film critic informs the reader of relevant facts in the consideration of an acting performance and then analyzes those facts in light of the purpose behind the acting performance in terms of the film’s story.

First, a physical description is given of the actor as a person and will highlight what s/he has done to become the character for this performance.

Then a scene is described in which this actor performs well. The analysis of acting does not get lost in details of plot but attempts to describe and analyze what the actor does with the body and the voice to convey emotion and move the story along.

A good analysis of acting does not just describe the film character and tell what s/he does but distinguishes the acting performance from other filmmaking techniques like story, writing, editing, in which the performance takes place.

Here are some points from which you can build an excellent analysis of acting performance in just two-three paragraphs.

*Note that the first bunch of items refer to what the actor does to prepare (before the performance) for the role.

Consider the following aspects of a performance, and as you describe them, make connections to the scene and its emotional impact:

You might say, “That’s a lot of stuff!” And yes, a good actor brings a lot of stuff to her or his performance. Of course, when you are discussing acting, don’t feel you must touch on every point enumerated above. Just think about these points as you come to assess the quality of an acting performance.

Following the general guidelines above for #1-#4, you should be able to do the first part of your analysis rather easily. It’s the second part in #5 that’s trickier, so I’ll provide an example.

Writing About a Scene: An Example

Here’s an example of a piece out of a longer acting analysis of an imaginary mystery romance starring Rita Hayworth and Clark Gable, movie stars in what has been called the “golden age” of Hollywood. The film critic thinks that Hayworth’s acting is really good and picks a scene where Hayworth communicates the flirtatiousness of her character, Karen. To say that the acting is “great” or that Hayworth’s performance “drips with sexuality and flirtatiousness” and end there is not very satisfying; details showing what the actor does to communicate that she is flirting are needed to make for a satisfying analysis of the acting performance.

Here are a couple of ways to do this, either a focus on the character or the actor:

In the following example, Rita Hayworth’s acting performance is described but the focus is on Karen, the character in the story:

Karen (Rita Hayworth) is flirtatious in this scene. She shows she still desires John and oozes sexuality, desire, and guile as she slinks toward him, swaying her hips and licking her lips. Her blue eyes glance at him from under her eyebrows, and she keeps looking away as she approaches, then touches his arm, presses her pelvis toward his thigh, smiles sensuously, and whispers, “I’m here” . . . .(And so on . . . this is the way you start the scene part.)

To focus more on the actor herself, the film critic changes the emphasis and perspective, making the actor’s name primary (and putting the character name in parentheses):

In this scene, Rita Hayworth portrays a flirtatious woman (as Karen) who still desires the man (John, played by Clark Gable) she had brutally rejected. Hayworth exudes sexuality, desire, and guile by slinking toward Gable, swaying her hips and licking her lips. Her blue eyes glance at him from under her eyebrows, and she keeps looking away as she approaches, and then touches his arm, presses her pelvis toward his thigh, smiles sensuously, and whispers, “I’m here.”

When you provide details to show what the character or actor does to convey emotions and move scenes forward, you not only enlighten your readers, but you give them a better appreciation of acting performance. The details you give and the words you choose to describe the performance bring the scene back to life in the mind of the reader.

You are a generous film critic when you give enough detail so that the reader can see and feel the film experience again, and in a new light. 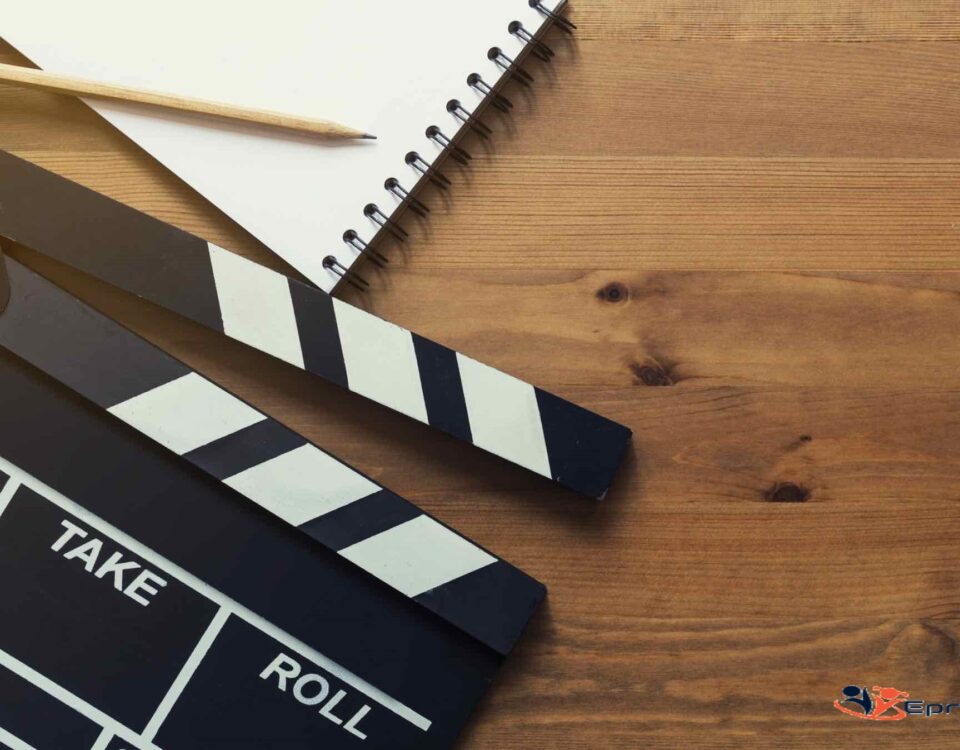